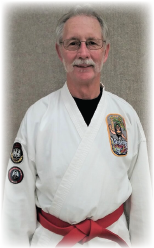 Mr. Z currently holds the rank of 9th degree Grand Master Black Belt in Isshinryu and a 1st degree Black Belt in Tae Kwon Do. He has attended seminars by many noted Isshinryu Masters, and teaching seminars through the National Association of Professional Martial Artists. He has been certified by the nationally accredited Cooper’s Institute. Master Z was inducted into the prestigious Isshinryu Masters Hall of Fame in July of 2016.  He is one of only 134 Masters selected from all over the world in the past 60 years to receive this honor.

In 1992 Ed started his own Isshinryu school, Family Self Defense Center, which he now co-owns with his wife Chris, a 8th degree Black Belt in Isshinryu.

Ed currently teaches with his wife, and attends local and national tournaments with his students.